The Geography of Friendship - Sally Piper 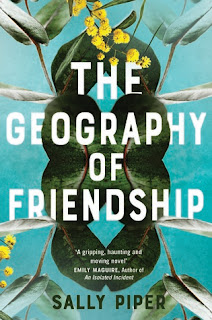 Synopsis:
We can’t ever go back, but some journeys require walking the same path again.When three young women set off on a hike through the wilderness they are anticipating the adventure of a lifetime. Over the next five days, as they face up to the challenging terrain, it soon becomes clear they are not alone and the freedom they feel quickly turns to fear. Only when it is too late for them to turn back do they fully appreciate the danger they are in. As their friendship is tested, each girl makes an irrevocable choice; the legacy of which haunts them for years to come.Now in their forties, Samantha, Lisa and Nicole are estranged, but decide to revisit their original hike in an attempt to salvage what they lost. As geography and history collide, they are forced to come to terms with the differences that have grown between them and the true value of friendship.

Beautifully written and easy to understand. Very interesting to see how each women is dealing with different things. What her thoughts and plans are, what happened in the past and what her possible future predictions are. I personally find female friendships hard to maintain and I liked seeing these three girls struggle a little as well - don't worry I am not a masochist. However, the blurb give away a feeling of suspense, a possible thriller. It's definitely not Stephen King but it gives a little "uneasy feeling".

My Fight Your Fight - Ronda Rousey 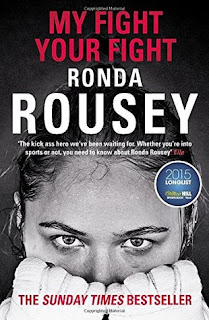 Synopsis:
'I have this one term for the kind of woman my mother raised me not to be, and I call it a ‘Do-Nothing B-tch'. It’s the kind of chick that just tries to be pretty and be taken care of by somebody else. That’s why I think it’s hilarious when people say that my body looks masculine or something. Just because my body was developed for a purpose other than f-cking millionaires, doesn’t mean it’s masculine. I think it’s femininely badass as f-ck because there isn’t a single muscle on my body that doesn’t have a purpose because I’m not a ‘Do-Nothing B-tch.'When Ronda Rousey made this speech she inspired women everywhere. Beyoncé even played a recording on-stage and it went viral. But Rousey has been inspiring others her whole career.The journey to the top for the most dominant mixed-martial-arts fighter in history has been filled with challenges. From a childhood marked by speech problems to the painful loss of her father, she grew up repeatedly pushing her mind and body to the limit in order to win. She battled prejudice to become the first female fighter in UFC. Now she is the biggest name in the sport, breaking attendance levels and re-writing the history books with her astonishing knockout victories, most in under a minute. She has also forged a successful Hollywood career as an actor.In this honest and inspiring book, Rousey relives her greatest fights and shares her secrets for success and mental toughness. She reveals how we can all be at our best, even on our worst days, and how we can turn our limitations into opportunities. It will leave you ready to face your own challenges in life, whatever they may be.

I love that girl so much. Such an inspiration and idol. I was looking forward to reading her book but it was just okay. A bunch of "I'M HUNGRY" and other unnecessary commentary. Still, I enjoyed it. I learned a bunch about judo and UFC and am happy I read that. Just know that you might be in for a little borefest if you're easily annoyed at something!